Many outcrops or samples of rock are simple and straightforward: they bear characteristic compositions, textures, or features that evoke a straightforward geologic interpretation.

But some are more complicated than that. Some outcrops or rocks show evidence of more than one “story” of formation. The successive chapters of its history are superimposed on its features, like a warrior accruing scars through a long and glorious career.

Introduction: What does “palimpsest” mean?

The concept of palimpsest can serve us well in making sense of such rocks. “Palimpsest” means “something reused or altered but still bearing visible traces of its earlier form.” The origin of the word is a little different: originally it meant “scraped again and ready to use,” which refers to ancient writing on sheets of parchment. These ancient “sheets of paper” (actually animal skins, specially treated) were fairly precious and not to be discarded. When the writing on them was considered expendable, the parchment was recycled in another round of use. Ancient scribes would use a sharp blade to scrape the dried ink off the stiff sheets of parchment, and make them more or less usable again. This was before “delete” buttons and even erasers. The thing that captures the essence of palimpsest is the fact that a faint ghostly version of the initial script could still be discerned “behind” the brand-new bold lettering. You can seeing through one aspect of the manuscript to peer into a deeper level of its more ancient history.

An important example is this one:

That photos shows a palimpsest which includes an older notebook of the Greek natural philosopher Archimedes that was later re-purposed by Christian monks as a prayer book. Archimedes’s work runs horizontally in this view, and the later religious overprint is in the lines of text that run vertically. The beauty and magic of a palimpsest such as this is that both texts can be extracted from the single page.

Bear this in mind as you contemplate this outcrop:

This is an outcrop that shows both a “primary” feature (sedimentary bedding) and a later, “secondary” feature (the tectonic cleavage that overprints the bedding). It’s one rock body that tells a story with two parts. It’s a palimpsest rock! As with the Archimedes Palimpsest, we can see through one aspect of the rock (the cleavage) to peer into a deeper level of its story (the more ancient sedimentary bedding).

Many, many rock units have more than one story to tell. They’ve been through a lot, and they have the scars to prove it. Let’s look at a few examples of these “palimpsest rocks.”

Start by examining this rock outcrop, located near the little coastal village of Keels on the Bonavista Peninsula of eastern Newfoundland. 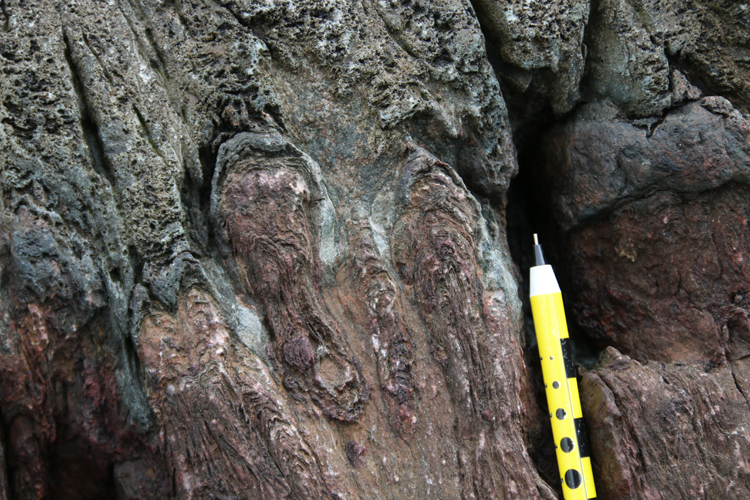 What you see here is a cross-sectional view of small stromatolites that are developed in sedimentary layers. The different layers are marked by the color change from red to green.

Here is a view looking down on the bedding plane, so you can see the stromatolites popping out in 3D: 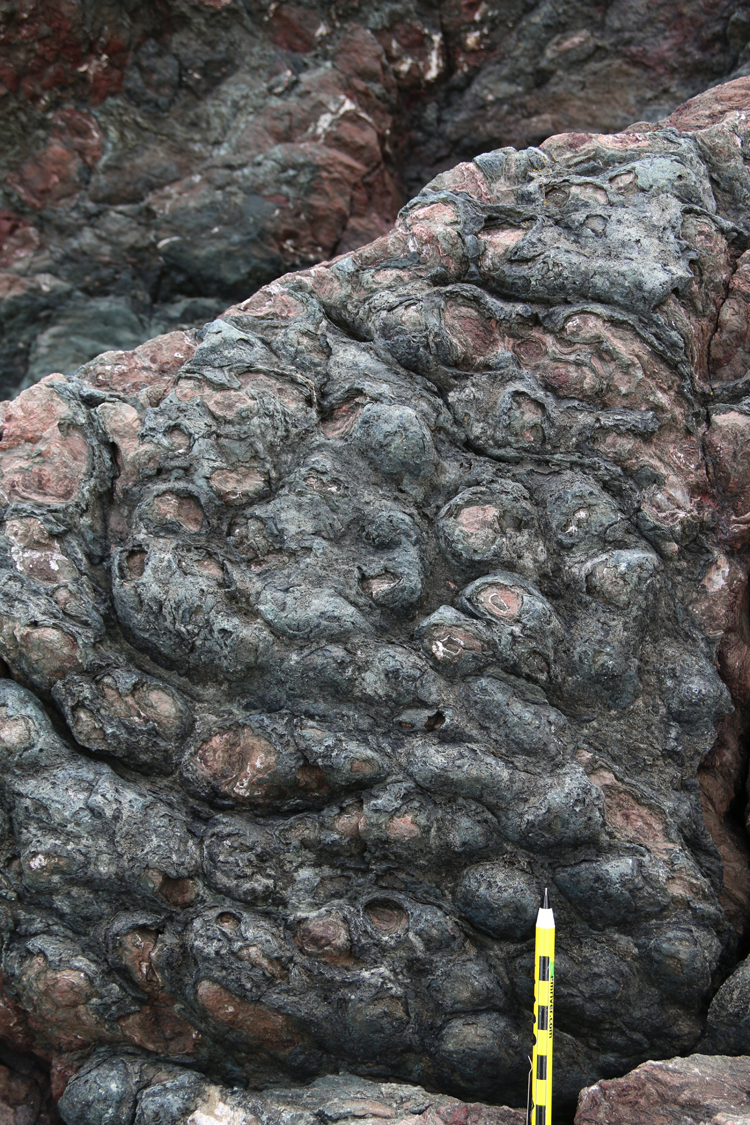 Not that in some places, the green layer has broken open, revealing the maroon layers beneath with their concentric rings. Here is a close-up: 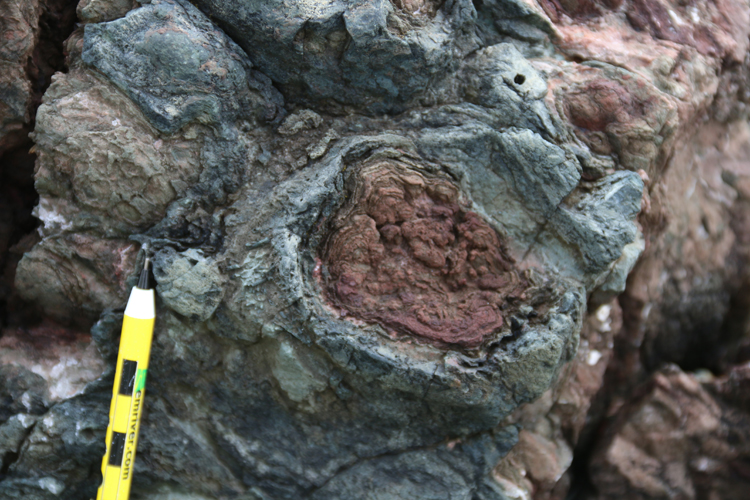 Stromatolites are ancient microbial mats that domed upward toward the sunlight as they grew. They were laid down in sticky layers of slime by photosynthetic microbes, probably cyanobacteria. But that’s not all we see here. The tectonic cleavage is also a prominent feature of these rocks. Here, you can see bedding marked out by the different colored layers going left-to-right across the outcrop, while cleavage is more or less vertical, and etched out by seaside weathering: 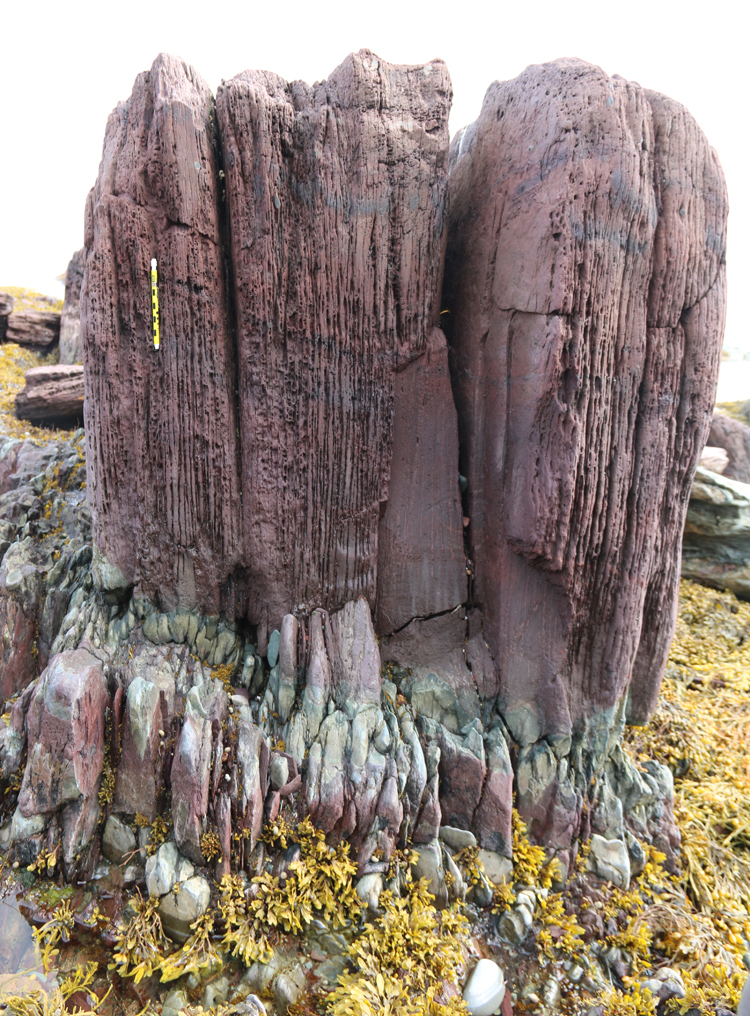 This cleavage is caused by tectonic squeezing, compression from the left and the right sides of the outcrop. This causes pressure solution to develop in the rock, as minerals like calcite dissolve in the direction of maximum pressure, and reprecipitate in directions of lower pressure. The rock is reorganized under the tectonic compression, shortening from left to right and elongating top to bottom.

The combination of the stromatolites’ shapes and the tectonic overprint (garnished with a final surface dressing by the various processes of weathering) gives us the final rock that we see today: the cumulative result of all these different processes playing out over time. This rock tells a story first of deposition of sediment in a shallow body of water (stromatolites need light to grow, so it cannot be too deep), followed by lithification and tectonic compression (resulting in the foliation), followed by uplift, exposure, and weathering.

Here’s a sample of similar rock, also from Newfoundland, showing a Cambrian-aged Olenellus trilobite with a slaty cleavage overprint:

Now consider this outcrop in Glacier National Park, adjacent to the Grinnell Glacier:

We see more stromatolites here – bigger ones. (Note that the same pencil from the Keels photos again serves as a sense of scale!) The fossils appear in honey-colored rock rather than maroon or green. Again, the outcrop surface is more or less parallel to the bedding plane, so the stromatolites appear as “bull’s eye” concentric rings. There is no tectonic cleavage on this outcrop, so there is no need to invoke an episode of mountain building on the basis of what we see here.

However, there is a clue that something else has happened in the history of this outcrop: the shallow grooves that go across the outcrop from left to right. Notice how they are all parallel to each other. These are glacial striations. This outcrop was underneath a flowing alpine glacier as recently as a hundred years ago. As the glacier flowed over the rock, bits of sediment entrained in the ice gouged into the rock, producing the striations.

These striations are not a “deep” part of the rock, but merely a carving of the surface of the outcrop. They are subtle and ephemeral: another ten thousand years of erosion might grind them away to an even surface. But while they last, they tell us about a recent cold period that managed to gouge this rock before melting back again.

In Shenandoah National Park, astride Virginia’s Blue Ridge, there are many outcrops of a strange looking green rock with spots. It looks like this:

This rock must be metamorphic, because it’s chock full of the pistachio-green colored metamorphic mineral epidote, the metamorphic product of reactions between plagioclase and pyroxene in the presence of water. But this epidote seems to serve as a kind of “matrix” surrounding discrete chunks of purple rock with white dots. These purple chunks are meta-basalt. Their vesicles have been filled in with white mineral deposits, making them amygdules. The overall texture, therefore, looks a lot like a conglomerate. What gives? Is this a sedimentary rock, based on this poorly sorted texture? An igneous rock, because of the basalt and its ancient gas bubbles? Or a metamorphic rock, as the epidote would imply?

This outcrop is part of the Catoctin Formation, a Neoproterozoic aged volcanic sequence that formed upon the rifting and breakup of the supercontinent Rodinia. Most of the Catoctin consists of basaltic lava flows, but there are pyroclastic deposits (tuffs) too, and even some sedimentary layers (stream conglomerates, lake muds) in between the lava flows, indicating the passage of a relatively long time between eruptions. There are also layers of volcanic mudflow deposits – what we would today call “lahars.” These slurries consisted of wet volcanic ash mixed with rock fragments. Most of the rock fragments were locally derived, and hence derived from the earlier part of the same volcanic sequence. Lahars are essentially sedimentary deposits of volcanic origin. We call the resulting deposits “volcanic breccias.” Whether the amygdules formed before or after the basaltic clasts were caught up in the mudflow is unknown.

However, the formation of the epidote (a typical greenschist-facies metamorphic mineral) is not something we would expect to form in a volcanic setting. It is almost certainly due to the (much later) Alleghanian Orogeny, an episode of mountain-building caused by the collision of ancestral Africa (Gondwana) with ancestral North America (Laurentia) during the late Paleozoic era. At that time, the rocks of the Mid-Atlantic were subject to regional metamorphism and deformation. The ashy matrix of the volcanic breccia was more susceptible to metamorphic change than were the solid clasts contained in the matrix. This explains the difference in how pervasive recrystallization was in the one part of the rock compared to the other.

This Catoctin meta-volcanic breccia is thus a sedimentary deposit of volcanic origin, that was then metamorphosed.

There’s a lot to look at here! Let’s name some of these features, so that we can use them to tell the composite story of this outcrop:

Joints are fractures in the rock. They are different from faults, because there hasn’t been any movement of the rocks on either side of a joint. Veins are healed fractures: the rock breaks, then mineral deposits seal the crack shut again. Percussion marks are “dings” that occur when a hefty particle of rock, such as a cobble, smashes against another rock. A cone-shaped package of fractures propagates a short distance into the impacted rock. It’s very similar to a piece of gravel hitting a car windshield and producing a spider-web-shaped pattern of cracks. Sand is draped up against the base of the outcrop, but is a much younger deposit than the sedimentary layers seen in the outcrop itself. These show graded bedding, a primary sedimentary structure that forms when a mixed-size deposit of sediment settles out from the water column: biggest particles drop out first, and finest-grain particles settle out last. Lichens are lifeforms (a symbiotic mix of an alga and a fungus) that colonize rock surfaces. The coin serves as a sense of scale, so we know how big all the rest of this is.

It’s quite possible that we only care about the graded bedding, and the rest of these details are just distractions.

With modern digital manipulation, it’s easy to remove some of the “distracting” elements from the image, to focus in on the characteristic that we find most relevant to our study – the graded bedding, say. But while Photoshop might make it easier to focus on the graded bedding, real rock outcrops look more like the first photo: with scuffs and scars that are evidence of part of the rock’s full story. If you are lucky enough to do geologic field work, you’ll have to figure out what is worth paying attention to. This will be determined by the sorts of questions you’re asking: are you interested in the original depositional setting of the sediment that later lithified to make this rock? Then the graded bedding is relevant. Are you an economic geologist interested in whether these rocks might have gold or other precious metals in them? Then likely the vein will be the characteristic you’re most interested in. If you’re interested in the stresses associated with uplift, the joints might be the most relevant variable. If you’re a lichenologist, none of that matters, and the rock is only a substrate for the lichens to colonize. You’ll soon have to practice the skill of seeing past the irrelevant information and focusing on what you most care about, but part of your practice should be to try and see the whole rock, the whole outcrop, as a written record of a much longer, much more complicated story.