I like the expression “rock record.” For me, these two words encapsulate Earth’s readable history, page by page. Pick up a rock, turn the page, delve into its mysteries, solve the puzzles. There is so much to discover – such a journey.

The journey here will walk you through the world of our most ancient organisms, not the oldest, but pretty old at 2 billion years. This was a world where life was in full swing, where the biomass was huge but occupied solely by bacteria and algae, or more specifically cyanobacteria (sometimes called blue-green algae). These organisms thrived in vast carpet-like communities, now preserved in the rock record as delicately laminated mats (or cryptalgal laminates), molded into simple domes or complexly branched columns (stromatolites), and even vast, reef-like build-ups. The environments in which they grew ranged from geothermal pools to the shallow confines of freshwater lakes, and marine settings that extended from the most landward extent of ocean tides (supratidal) to deeper shelf and platform.

Stromatolites are known from sedimentary rocks as old as 3.4 billion years (North Pole deposits, Western Australia – this 1980 paper was one of the first to fully describe these). They dominated Earth’s biosphere for the next 3 billion years; clearly, life was taking its time to get over that first rush of DNA replication. They relinquished this foremost position during the Cambrian invertebrate explosion because of competition for their niche and from predation – lots of critters like to eat algae. Today, cryptalgal laminates eke out a living in a few specialized environments, Shark Bay on the Indian Ocean coast of Western Australia being one of the better-known examples. 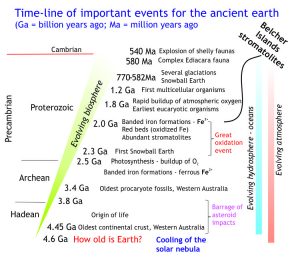 We should be immensely grateful for this Precambrian flourish. Cyanobacteria are photosynthetic prokaryotes, and the general consensus is that they were responsible for the production of nearly all our atmospheric oxygen. Most (but not all) modern cyanobacteria thrive in sunlight which means growth is limited to the photic zone (the part of the water column that sunlight penetrates, at depths less than 200m). This condition appears to be borne out in the rock record where fossil cryptalgal structures are commonly associated with other sedimentary features also developed in shallow water under the influence of tidal currents, the effects of waves, and storms. We will see some of these sedimentary facies on this trip.

This field excursion will take you through a Paleoproterozoic succession in Belcher Islands, a small group of islands and islets in eastern Hudson Bay. Exposure here is superb – look again at the image at the top of the page. But the weather can be atrocious. I spent 20 weeks in total in 1976-77. For a Kiwi having just arrived in Canada, meeting the local Inuit, and absorbing the scenery and geology were life-affirming experiences.

We begin this field excursion at the high tide mark, making our way across the intertidal zone, through the shallow subtidal zone where waves break, and thence to deeper offshore waters beyond the immediate influence of anything other than storm waves.  You can check your ‘paleo-location’ at each step using the diagram below. 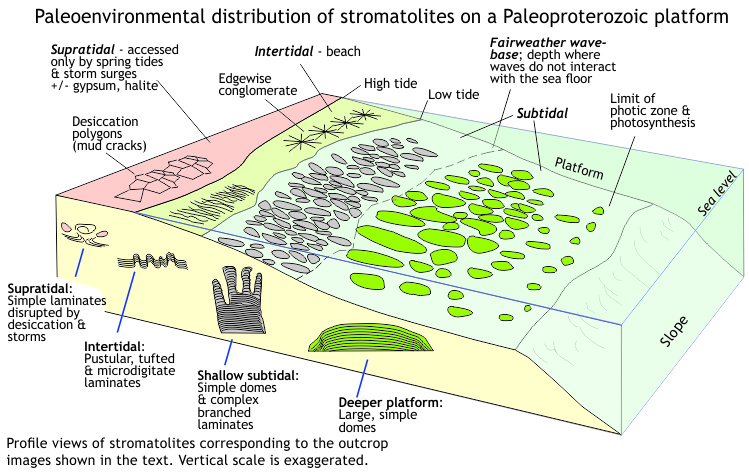 At each location we will compare modern examples with the ancient rock record. We make these comparisons because they are an essential part of how we interpret ancient environments. This way of thinking (sometimes stated as ‘The Present is the Key to the Past’) helps us in two ways: first, it provides us with a warrant to reason inductively, to interpret or to predict; and second, it allows us to use the actual processes and products we observe in modern environments to help us solve the puzzles of the past.

We begin our geological transect on a broad tidal flat. Its landward extent may include a zone accessed only by spring tides and storm surges – the supratidal zone. In arid regions evaporite minerals like gypsum and halite may accumulate (the best modern analogues for these are sabkhas along the Persian Gulf). Any cryptalgal mats that grow will be subjected to frequent desiccation; they are susceptible to reworking by strong winds and storm tides where they are mixed with other sedimentary fragments ripped from the tidal flat.

In the next two images, compare the ancient example with some modern supratidal microbial-cryptalgal mats.

Working seawards we pass through the intertidal zone, a region washed twice daily by tides. Desiccation of mats is less intense here, but they are more susceptible to erosion by waves, particularly storm waves. The example here shows many erosional discordances where mats were regularly disrupted and regrown.

Again, we can compare modern analogues with the 2 billion year-old examples. The modern structures below are from an Abu Dhabi sabkha.

In the images that follow,  fan-shaped clusters mid-image are edgewise conglomerates that consist of semilithified slabs of carbonate mud and cryptalgal laminates, ripped up and stacked one against the other (note this is a profile view). This kind of structure commonly forms on beaches – the modern example (right image) consists of shale slabs that when stacked, present a crude radial pattern (this is a bedding view).

Ripples are extremely common on sandy tidal flats. In the rock record, layers containing ripple crossbeds may alternate with layers containing mats. The examples below are interference ripples where two sets of ripples almost at right angles, appear to interfere. These structures are excellent indicators of ancient tides where one ripple set formed on the incoming (flood) tide, the other on the outgoing (ebb) tide. If we can determine the orientation of the ancient shoreline, then we can hazard a good guess as to which set records the tidal flux.

The subtidal zone below low tide is always submerged. This is the region of constant water movement; it includes the surf zone. Here, cryptalgal buildups tend to be larger and more complex; they may form as simple domes or complex branched columns. In outcrop they can be spectacular, and quite beautiful.  Finding modern analogues for this kind of stromatolite is more difficult – there are very few locations where they form today. One notable exception is Shark Bay in Western Australia, an iconic location where modern, actively growing domes bear an uncanny resemblance to ancient structures, as illustrated below.

Even more spectacular are stromatolites that developed branched columns of many shapes and sizes. An excellent example is shown below.

Each of the skinny layers, commonly less than a mm thick, represents a once-thriving mat of cyanobacteria, growing on the seafloor. The laminates consist of very fine carbonate mud that adhered to the algal filaments; the filaments may also have promoted precipitation of fine carbonate minerals, such as aragonite. Most of the original organic matter was removed by chemical processes as the sediments were buried.

The stromatolites shown above consist of columns that are about 50 cm high – in fact the columns in some stromatolites can reach several metres. However, the column height is a bit deceiving. Each lamination represents a period of growth on the seafloor (days, months). If you trace a lamination, or perhaps a set of laminae from one column to its nearest neighbours, you will see how much relief the stromatolite had during growth. We call this synoptic relief. In many stromatolites synoptic relief was only a few mm or cm. In other words, if you were walking across the surface you would only see low mounds and ridges rather than tall columns. Large columns and domes therefore represent relatively continuous growth over long periods (perhaps hundreds of years) where columns gradually build, keeping pace with sediment accumulation on the seafloor. Sometimes growth was interrupted by storms or long periods of desiccation during exposure; when growth re-established, a new branch or dome would develop over the earlier-formed structures – hence the branched stromatolite columns we now see in cross-section views in outcrop.

Deeper water platform, but within the photic zone

Our transect takes us to deeper water where normal or fairweather waves no longer interact with the seafloor. Here, the cryptalgal laminates grow in quieter waters within the photic zone (perhaps a few tens of metres deep), washed by tidal currents. There is much less disruption of growth by storms (and no desiccation), such that domes extend much farther across the sea floor than in shallower waters. The surrounding sediments are also finer grained, perhaps with ripples migrating across the seabed. However, the synoptic relief is greater; in the example shown, the domes are 2 m to 4 m wide with synoptic relief of 30-60 cm. Branching is less common because there were fewer disruptions to mat growth.

The field excursion ends beneath the waves offshore, figuratively in our interpretations of the two billion year-old rock record, and practically as we made our way across the modern sea floor. Surfacing will allow us to breathe, and reflect on what we have observed.

Unless indicated otherwise, all the images used in this chapter are from geological-digressions.com