Geologists identify minerals by their physical properties. In the field, where geologists may have limited access to advanced technology and powerful machines, they can still identify minerals by testing several physical properties: luster, color, streak, hardness, crystal habit, cleavage and fracture, and some special properties. Our Big Ten Minerals make up the majority of Earth’s lithosphere and are usually seen as small grains in the rock. Geologists rely on a magnifying hand lens as an essential tool for identifying most minerals in the field. Of the many properties that minerals can exhibit, we will consider only those most useful for identification as small grains surrounded by other minerals in rock. 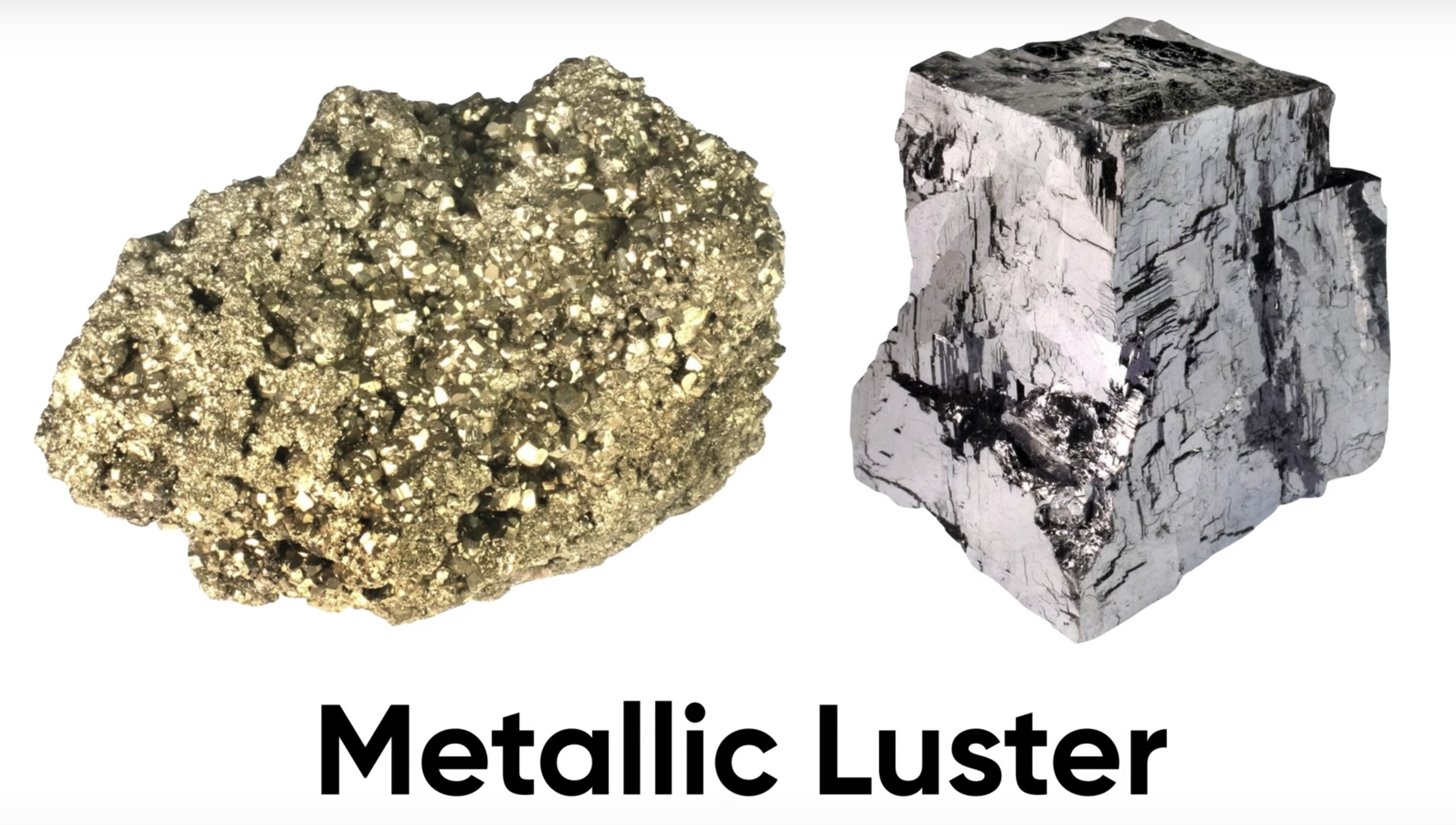 The first thing to notice about a mineral is its surface appearance, specifically luster and color. Luster describes how the mineral reflects light. Metallic luster looks like a shiny metal such as chrome, steel, silver, or gold. Metallic minerals are also always opaque. Non-metallic minerals may be shiny and reflect light, however, they do not look like a metal. 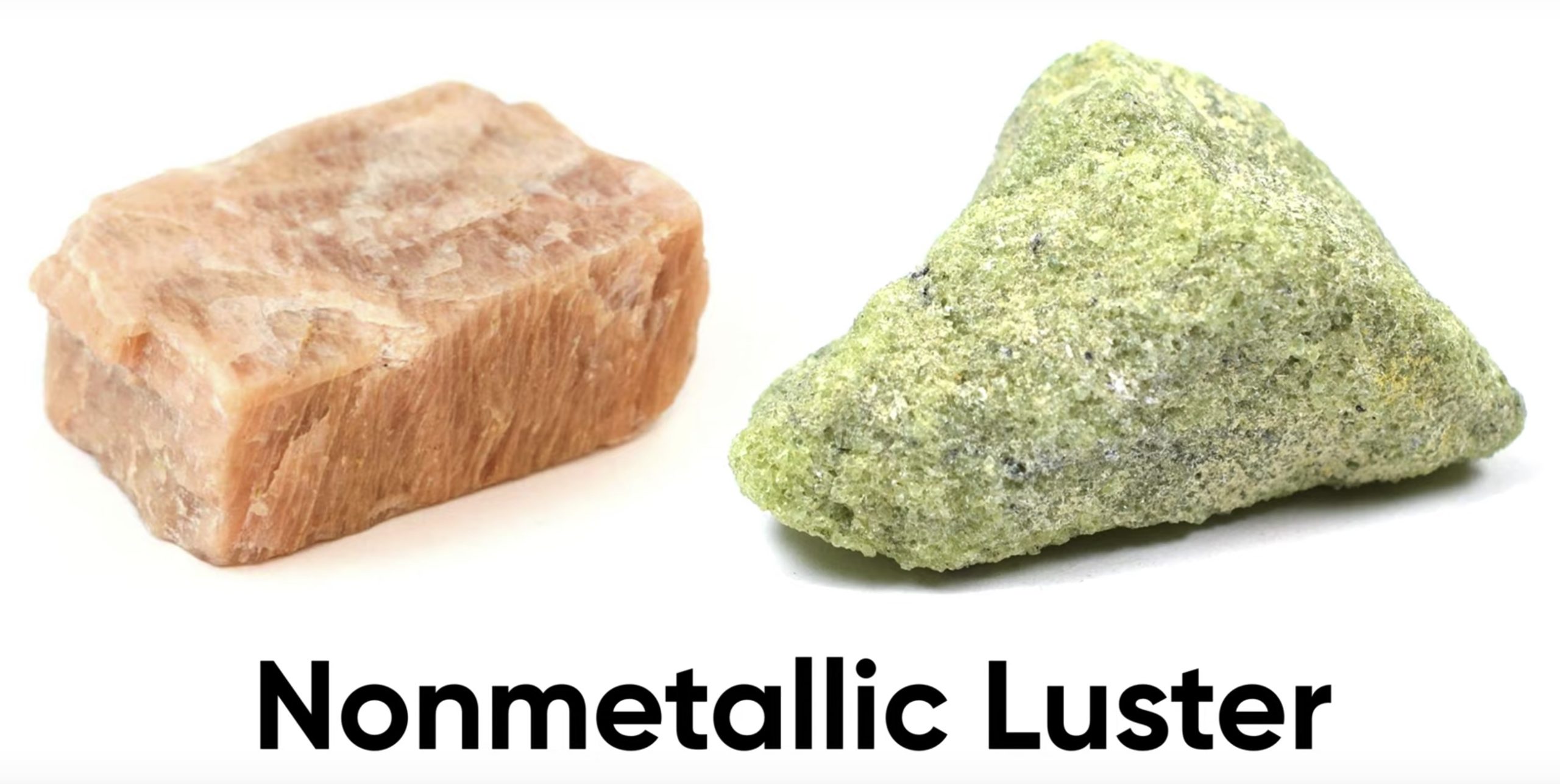 Surface color may be helpful in identifying minerals, although it can be quite variable even within a single mineral family. Mineral colors are affected by the main elements present, but also by impurities, inclusions, and defects in the crystal structure. Pressure and temperature conditions can also affect mineral color. Using the mineral quartz for example, in its purest form (SiO2), it will be clear. However, impurities by trace amounts of iron can change the color from purple (amethyst) to yellow (citrine) or pink (rose quartz); tiny inclusions of the titanium mineral rutile can give quartz a blue color, and exposure to natural radiation within the crust can provide a grey (smoky) color.

All of these samples are quartz. Pure quartz (SiO2) is the clear sample on the left-hand side; followed by smoky quartz, rose quartz, and amethyst quartz. Each of the colored quartz samples contains an impurity in the chemistry. Credit: Robin Rohrback, Mid-Atlantic Geo-Image Collection (M.A.G.I.C.) on GigaPan. CC BY Attribution 3.0

There are some minerals that predominantly show a single color. However this is not true for our “Big Ten Minerals” or the other most common rock forming minerals. All of these minerals have a predictable range of colors due to element substitution within their crystalline structures. Feldspars, the most abundant minerals in the Earth’s crust, range in composition from calcium-rich to sodium-rich to potassium-rich varieties and many compositions in between. Feldspar colors including pink, white, green, gray and others. With notable exceptions, color is usually not a reliable diagnostic property of minerals. For identifying many minerals, a more reliable indicator is streak, which is the color of the powdered mineral.

Streak examines the color of a powdered mineral, and can be seen when a mineral sample is scratched or scraped on an unglazed porcelain streak plate. A paper page in a field notebook may also be used for the streak of some minerals. Minerals that are harder than the streak plate (or the paper) will not show streak, but will scratch the porcelain (and tear the paper!). For these minerals, a streak test can be obtained by powdering the mineral with a hammer and smearing the powder across a streak plate or notebook paper. Note the absence of a mineral streak via this method  is also a useful observation to record.

While mineral surface colors and appearances may vary, their streak colors can be diagnostically useful. An example of this property is seen in the iron-oxide mineral hematite. Hematite occurs in a variety of forms, colors and lusters, from shiny metallic silver to earthy red-brown, and different physical appearances. A hematite streak is consistently reddish brown, no matter what the original specimen looks like. Iron sulfide or pyrite, is a brassy metallic yellow. Commonly called fool’s gold, pyrite has a characteristic black to greenish-black streak.

Hardness measures the resistance of a mineral to abrasion. Mohs Hardness Scale assigns a number between 1 and 10 indicating the relative scratch-resistance of minerals when compared to a standardized set of minerals of increasing hardness. Mohs scale was developed by German geologist Fredrick Mohs in the early 20th century, although the idea of identifying minerals by hardness goes back thousands of years. Mohs hardness values are determined by the strength of a mineral’s atomic bonds. The figure shows the minerals associated with specific hardness values, together with some common items readily available for use in field testing and mineral identification. A steel pocket knife blade, which has a hardness value of 5.5, distinguishes between hard and soft minerals on many mineral identification keys.

Because they develop on atomic surfaces in the crystal, cleavage planes are optically smooth and reflect light, although the actual break on the crystal may appear jagged or uneven. In such cleavages, the cleavage surface may appear like rice terraces on a mountainside that all reflect sunlight from a particular sun angle. Some minerals have a strong cleavage, some minerals only have weak cleavage or do not typically demonstrate cleavage. But, don’t be fooled: Among mineralogists, a common saying is that “cleavage in a mineral is great, when you see it. But if you don’t, do not assume it is not there.” Fracture is different than cleavage in that the broken surface will not be flat or even. The breakage does not occur along a distinct plane within the crystal lattice. Fracture is typically uneven however can also be very distinctive. Several common minerals, quartz and olivine, will often display a conchoidal fracture similar to that seen in obsidian or broken glass.

Special properties are unique and identifiable characteristics used to identify minerals or that allow some minerals to be used for special purposes. A simple identifying special property is taste, such as the salty flavor of halite or common table salt (NaCl).

A simple test for identifying calcite and dolomite is to drop a bit of dilute hydrochloric acid (10-15% HCl) on the specimen. If the acid drop effervesces or fizzes on the surface of the rock, the specimen is calcite. If not, and dolomite is suspected, the specimen can be scratched to make a small amount of powder. If the acid drop fizzes slowly on the powdered mineral, the specimen is dolomite. The video below compares these two minerals and their effervescence reaction. Geologists often carry a small dropper bottle of dilute HCl in their field kit.

Some iron-oxide minerals are magnetic and are attracted to magnets. Common magnetic minerals include magnetite (Fe3O4) and ilmenite (FeTiO3). Magnetite is strongly attracted to magnets. Ilmenite and some types of hematite are weakly magnetic. Geologists often carry a free-swinging magnet in their field kit to test for magnetism.

Review the following video to learn more about the basic properties of the rock forming minerals.